At a very young age, I knew how it was to be very sick.  I was too sickly, I could be considered a regular “customer” of hospitals.  If hospitals and clinics would have a promo like Starbucks – earn enough points to get your free coffee on your next visit – I would be one who can easily earn the required hospital points to avail of a free confinement in the next visit.

i remember this! my elder sister took this photo and i was just discharged from (as usual) the hospital.  too weak to smile! hahaha!

During my childhood, nurses and doctors are no longer surprised to find and see my name on their medical charts.  Nengkoy (my mother) in fact have loads of stories and anecdotes about her experiences in hospitals and during medical emergency situations that involves none other than, me.

I know how it is to be very very sick.  That is why every time I see a young child at odds and is battling an illness and medical circumstance, my heart would just melt.

I am in tears when I encounter this trending news about John Oliver Zippay, the young kid who battled and won a war against cancer.

The video washed my eyes!  I am super happy for J.O. (his nickname).  What is good to know is that aside from being sickly at a young age, both I and J.O. were tagged “STRONG” by our respective fathers.  The hashtag in J.O.’s GoFundMe page created by his dad was #JOStrong.  My Tatay (Dad) on the other hand named me after Neil Armstrong. 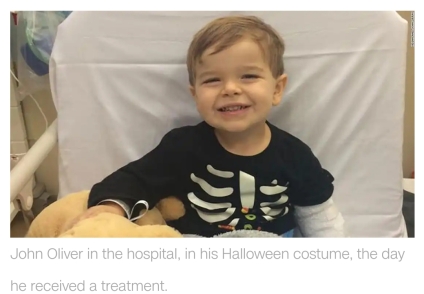 got this from cnn photos!  super happy for this boy! so brave, so brave!

There’s one big difference though between me and J.O.  Aside from his infectious charm, the difference is that J.O. is the cutest and the bravest!

Cancer (not the horoscope but the ailment) in which ever form, type, category or origin it is has gained the reputation of being a deadly and dreaded disease.  It has claimed a considerable percentage of the human population.  This disease is so deadly, it does not only attack the physical being, it also plagues the human emotion as well as drain a family’s bank account.  Cancer nowadays is so prevalent everybody seem to know someone who had or have it.

Because of this, people in groups – may it be a foundation, an organization or a company – has come up with noble and novel ideas on how to help those affected.  Case in point are the two ongoing projects situated at two ends of the planet.  Their strategies may vary but their aim is the same.  To kick cancer’s ass.

One is located in Manila, particularly the LJC Restaurants’ ‘Good to Dine’ promo.  It is a strategy that lets you donate to the needy yet at the same time let you enjoy a penchant palatal experience.  It is because for every ordered special dish included in the campaign, the patron gets to donate ten (10) pesos of his payment to the Philippine General Hospital’s Cancer Institute.

The campaign will run until the end of the year (2014) and the accumulated fund will be used to finance treatments of cancer patients.  So when you plan to dine in a restaurant, might as well settle for these restaurants and order for these items… 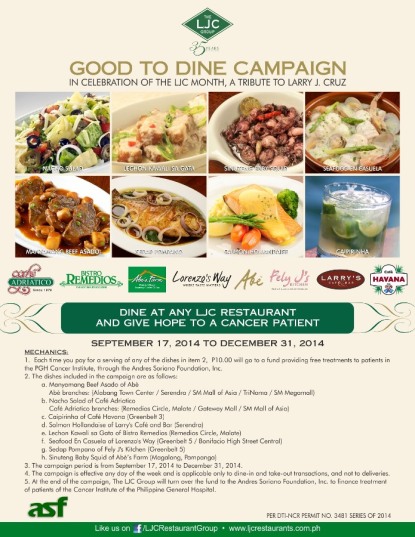 The other is located in New York.  That is Hoda Kotb’s (host of The Today Show) direct-to-the-point fundraising and donation campaign. Usually quirky Hoda and her group tickle viewers’ sentiments and emotion by letting them watch and listen to a beautiful mashed up songs of two of pop superstars Sara Bareilles’ ‘Brave‘ and Cindy Lauper’s ‘True Colors‘.

Indeed, the song and the music video touches the heart.  It will make you realize that you haven’t seen what a true character of ‘brave’ is until you’ve seen kids kick cancer’s ass.

All proceeds of Hoda’s campaign will go to grants for pediatric cancer research via the American Cancer Society.  Click HERE if you wish to donate.