Grand Slam tennis tournaments (may it be the Wimbeldonn, the US Open, Roland Garros, or the Aussie Open) are full and bombarded with statistics.  Their organizers along with various sports networks and correspondents makes the sport more interesting through the usage of various statistical analyses and historical data about the game.

With the recent fantastic win of my most favorite tennis player in history during the 2017 Australian Open edition, let me feature my own stats concerning Roger Federer and the recently concluded championship match.

Zero. Zero is the number of times I watched tennis grand slam match last year.  I seem to have lost interest about the game when Roger Federer started losing in a string of tennis matches and Rafael Nadal seem to have hidden from the limelight due to injury.  Without this two, tennis for me – until just recently – seem to already become an uninteresting kind of sport to watch.

Nil.  That is the volume of my expectation that I would get to actually see Roger Federer again in a Majors championship.  Nil, null or nothing was also my level of expectancy that Roger Federer and Rafael Nadal would battle it out in the finals of a Grand Slam title.  But stars seemed to have realigned and let these two legends reach the finals of the 2017 Australian Open.

Countless.  While watching the championship game, I lost count on the number of times I shrieked, shouted and cheered every time Roger Federer wins a point against Rafa Nadal.  I also lost count on how many times I gasp for air every time Rafa would fix his shorts or pick his wedgie before every serve.

Thirty Five and Ten.  As if defying physical drawbacks like skin sagging, joint pains, poor eyesight and reduction in motor agility that comes along with old age, 35 is the age of Roger Federer when he won last Sunday’s tennis championship.  While 10 (from the range of 0 being the lowest and 10 being the highest) shall remain my rating in terms of the hotness of Rafael Nadal.

Five.  This is the number of times I fervently prayed to the heavens during the recent Aussie Open Federer vs Nadal championship match.  Since it took Federer 5 sets to win, every freakin’ set, I prayed “God! Please let Roger win!”

Eighteen.  After winning the Australian Open 2017sweet eighteen is the huge and unbelievable number of times that my idol Roger Federer won the Grand Slam tournaments.  And what is so sweet about this 18th Majors title is that he won it over a match with Rafa whom I suppose he considers his greatest nemesis in the game of tennis.  Nadal I believe is the legendary tennis player who actually prevented Federer from winning more grand slam championships!

One Hundred.  I’m not a Swiss, I have never been to Switzerland and I don’t play tennis.  But a solid 100% shall I remain to being a huge fan of Roger Federer! 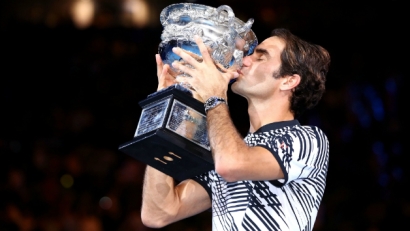