I recently learned one negative aspect on earth that results to something positive!  It’s the Negative Ions that are abundant in nature especially around waterfalls, the ocean surf and the beach.  Scientists say that negative ions are like antimicrobial agents that neutralizes fee radicals and promote good health as well as overall well-being.

I recently harvested a pretty good amount of negative ions when I recently had a fun out-of-town adventure with my colleagues at one nice beach resort in Laiya, Batangas.

Refreshed and recharged, I was able to create two videos from this summer in September fun adventure.  Happy watching…

This is how I would summarize my thought after I and my friend-colleagues has gone to Laiya, San Juan in the province of Batangas to scout for a venue for our upcoming company’s post-summer outing.

We basically checked-out, visited and inquired almost all of the major sea-side vacation lands in the area but in each of the resorts we visited there seem to be something lacking.  We have gone to seven leading resorts yet we still were not one in deciding which to choose.  This until, we decided to get lost and do a little detour before heading back to Manila.

And here is what we found!

It really feels good to be lost in the right direction…

Last week was my second visit to the beautiful Hokkaido, the second largest island in Japan.  I never recognized this place as compared to how it looked when I was here the first time.  The beauty, appeal and character of Hokkaido is totally different during the winter season.  Since it is summer, my second visit felt like it was my first.

I personally prefer Hokkaido during the winter months.  Maybe it is because I have so much summer here in the Philippines.  It is basically like 365 days of summer in my tropical country.

And since it is summer, I and my companions took the opportunity to visit the Farm Tomita’s lavender fields in Furano.  Try smelling the flowers in these photos… 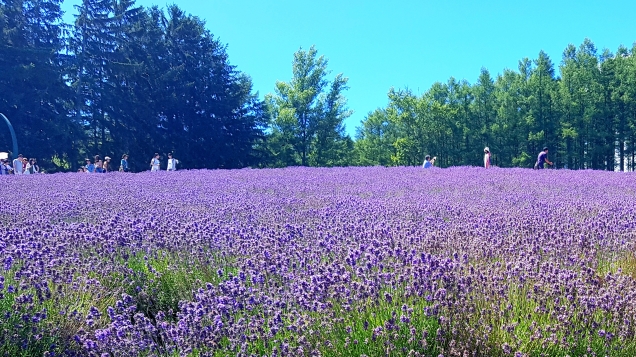 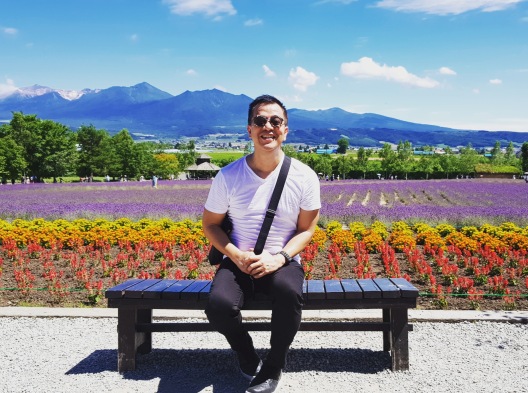 If you have been a tourist in the Philippines for a couple of times already and you believe that there is no longer a reason to be back in this tropical country, well, you must reconsider this country again.  Or if you think that you have limited time to spend here in the Philippines and think that getting to popular tourist destinations like Cebu, Palawan, Boracay and Bohol will entail too much of time and money, then you can simply consider going to Sinagtala Farm and Resort.

I and my colleague were just there a week ago.  Sinagtala is located in Orani, Bataan.  It is only two hours easy driving north of Manila.  Why am I recommending Sinagtala as a place to go?  It is because I simply had an awesome experience in this resort.

The food was unexpectedly delicious!  Don’t miss the native Pinakbet and the surprisingly delicious Taro Ice Cream for dessert.

The huge infinity swimming pool is cool!  I usually don’t dip in a public pool, but upon seeing how clean and inviting the pool was, I never had second though of splashing in it.

The adventure rides were all so fun!  I love the zipline!!! 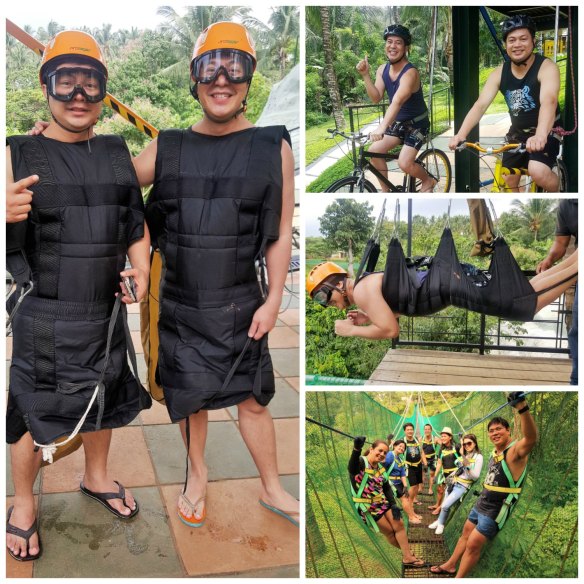 At only 750 pesos (US$15) you can try all their adventure rides and facilities – zipline, sky bike, hanging bridge and giant sky swing.  I am living in the Philippines, I have been to Sinagtala yet I consider coming back in this beautiful place.  I had so much fun in this place I was enthused to create a simple music video of me and colleagues enjoyment in Sinagtala.

Summer 2017 is on here in the Philippines!  Here’s my first summer adventure this year!  Fun spending an early summer season with MJ, Willie and JB…

It’s my third time in Baler and this bucolic province never ceases to amaze me.  Love this place!

Not in my wildest dreams that I would be one with the waves.  The thrilling waves of Sabang Beach in Baler, Aurora Province is the site where I first learned and experience gliding on water.

While learning the basics on how to position my body and the technique on how to stand on top of the surfboard, I pity my tutor because he will have to squander tons of patience, immeasurable strength and lots of miserable time before I can finally learn to stand and ride a thrilling wave.

trip to baler is incomplete if without surfing…

At my present age, in which my body is two steps behind my brain, I know that being a beginner sucks! And I have always accepted the fact that the whole Pacific Ocean would first have to dry up before I’d be able to learn how to surf.

And while acting out the necessary moves being taught to me by my tutor, I was also thinking that since it would be impossible for me to attain balance and be able to stand on a moving surf, I might as well enjoy the thrill and the feeling of my body crashing and splashing down the ocean!

But lo and behold, after just few attempts and immeasurable metric tons of salty water that I drank everytime I fell off the moving surf, I was already standing atop a gliding surfboard! I was like floating on air!

ryan, my tutor was also my “taga-buhat”

I can say that the experience was indeed pure fun!  It’s the ultimate feeling of joy out from accomplishing something that you never dreamed of in the first place.

I was so ecstatic, I even hugged my instructor when he approached me telling me “Good job!”  It’s that happy feeling of accomplishment that gives me a reason to visit back this thrilling side of the Pacific Ocean.

It was eleven thirty in the evening.  I woke up drenched in sweat for I forgot to switch on the air conditioning unit before I fell asleep.  It’s already the third week of May and yet the scorching summer heat still lingers here in Metro Manila.  With this roasting temperature, I am starting to believe Dan Brown when he wrote in his latest novel Inferno that found in Metro Manila are the gates of hell.

I tried but could no longer go back to sleep, I slipped into my old blue jeans and put on a freshly laundered singlet.  I proceeded outside the streets of “the gates of hell” to find anything that will cease the torridity off my body.

About a hundred meters away from my flat while walking through Vito Cruz Street I found an eatery.  It’s about to close but I begged the attendant to let me in for I want to order, guess what? Answer: Halo-Halo.

Yeah! There is a new Teresita’s branch here in hell-gate Vito Cruz!!!  It’s no longer just in the far away hell-gate Tomas Morato!!! 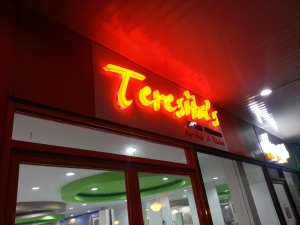 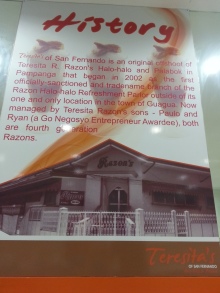 alone inside this refreshment parlor, i did not hesitate taking these photos 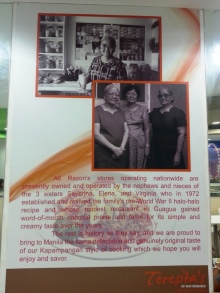 Of course I ordered the “Special” version, i.e. with “minatamis na langka” (sweetened jackfruit) only worth Php 95.  It’s not the generic Filipino halo-halo neither the typical Razon’s halo-halo.  Instead it’s of a grandeur version, that is, with heaps of chunky-to-the-bite banana, brutal portions of glutinous macapuno, the sweet viscous lumps of tasty langka, smooth shaved ice with super generous amount of the vicious and sinful leche flan.  I swear to God they have the tastiest halo-halo in all face of heaven, purgatory and hell. 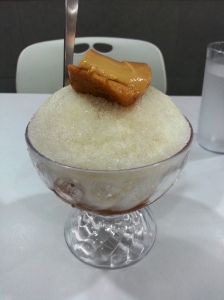 don’t be fooled by the lucid and incomplex look of this halo-halo. astonishing heaven is lodged beneath those shaved ice

After paying my bill and start to walk back to my unit, I realized that Tesesita’s Halo Halo is something that can be compared to a piece of heaven and that I am actually glad to be living here in the “gates of hell”.