One of the highlights of my recent trip to Taipei was that I and my friends got to attend the biggest gay pride parade and party in Asia! Me, MJ, JB and Willie were among the 130,000 people who attended the event.

The energy and vibe that night was truly brighter than my future! Hahaha!  The ability to connect with gays from all around the world was truly an international experience.  And since we are foreigners in Taipei, we somewhat let loose for there weren’t any conservative watchful eye to answer to (like if we were back home in Manila).  We knew no one in the event yet everyone was joyful and very welcoming. 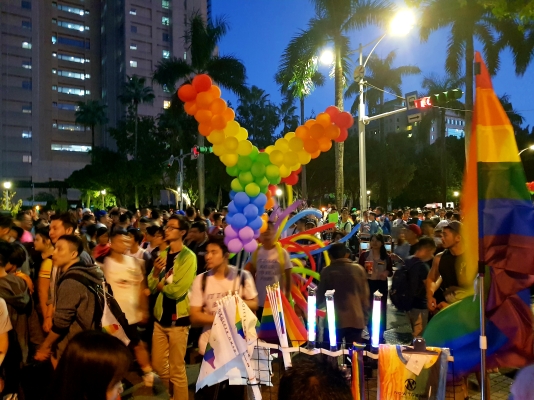 Though we arrived a little late, we still got so awe-struck by the people!  There were Drag Queens and Kings, there were Queer Super Heroes, there were Cosplayers, there were Happy Smiling Angels, student protest groups and tons of fit non-heterosexual abdominal muscles flashing!

I never hesitated asking interesting people to take their photos with MJ and Willie and no one refused!  We were like being a part of the big LGBTQ+ family fighting for the same cause.

When we joined part of the pack who started to head home to their respective vibrantly amazing lives, I took the chance of buying a bracelet as a souvenir.  This trinket signify that I took part on being one with the happy rainbows that day. 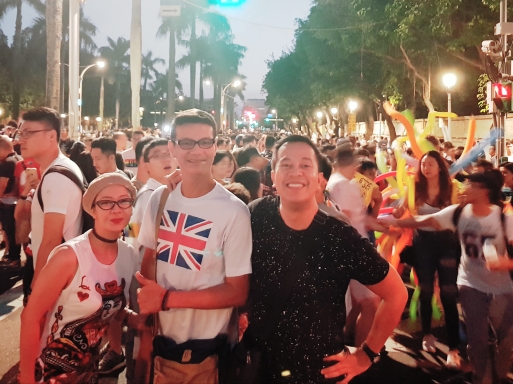 Canadians must be very pleased and delighted with their Prime Minister.  As seen in the news, Justin Trudeau with his family joined (for the 2nd year in a row) the march and walked the streets of Toronto to celebrate Pride Month causing the internet to swoon over such a cool world leader. 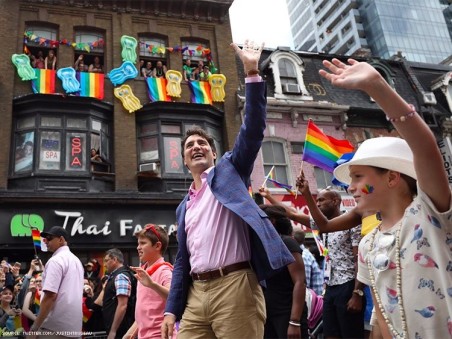 Canada has indeed gone so far ahead as compared to my country in terms of respecting sexual diversity, equal rights and self-affirmation.  It is sad to note that the present President of the Philippines (my president) – dubbed as the Punisher by Times Magazine and known around the globe as an iron-fisted ruler – joining a Pride march and the rainbow procession on the streets of Manila or Marikina seem very unlikely.

Watching the news about Canada makes me drool… Happy Pride!

Stupid as it may sound, but my preconceived idea of the gay mecca in America is that the streets are filled with pink elephants, happy unicorns, colorful fairies, gentle dragons and sparkling angels.  All of these were erased when I got to walk the streets of Castro District in San Francisco. 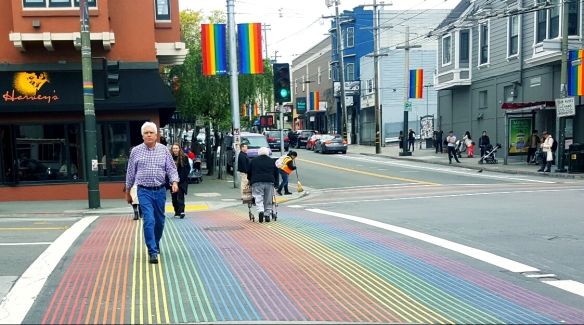 The Castro is considered San Francisco’s (if not USA’s) gay-friendly epicenter.  It actually has glitzy bars and restaurants, flamboyant shops and of course a historical theater.  You would know that you have entered this area when lampposts are donned with rainbow flags and zebra lanes are in rainbow colors.

But what I had was a quiet walk in the Castro.  I was nevertheless left to realize that the area is a thriving marketplace for all things gay.  While I grasp on the sidewalk historical plaques/markers representing past LGBT icons, it was not difficult to recognize that the area is catered to people who identify with the LGBT culture. Actually, passing through a coffee shop seated outside were two young men kissing.  And wall murals and posters abound in the area about gay rights and human rights. 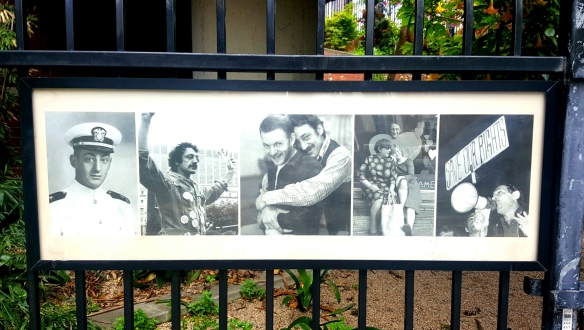 at the steve harvey plaza, milk!

The streets may have been calm and quiet on the time of my visit, but I can truly feel the lingering colorful gay spirit in the atmosphere and the unabashed zest for life of The Castro.

A lot of folks – me included – get so excited seeing a rainbow in the sky.  I know that rainbow is just but a wonderful result of a climate condition and has nothing to do with luck.  But rainbows don’t appear often that is why seeing it invokes joyful hope and optimistic promise.

This is what I exactly felt when I woke up this morning, rose from my bed, looked out my window and saw this brilliant display of colors in the sky. 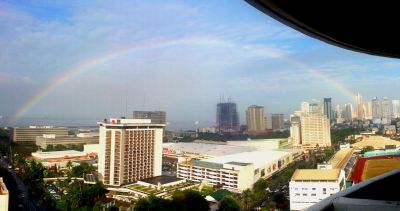 the bow of God

I would like to believe that seeing it is a sign from the cosmic universe that something wonderful – may it be divine providence or good fortune – is ahead.  For me, seeing a rainbow has always been a delightful, ethereal and inspiring experience.