I know that being next to someone is the ultimate favorite place of everyone.  But if a spot that is about 2.5 hours drive and you no longer cannot count the number of times that you have been there, does this mean that such a place is also one of your favorites? 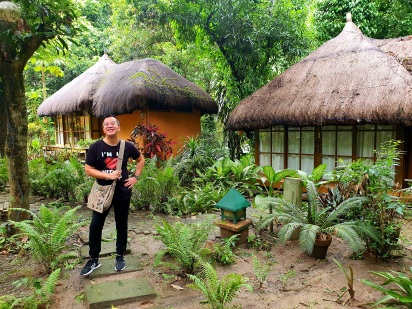 This will be short…

Abe’s Farm, a quiet staycation venue at the foothills of dormant volcano, Mt. Arayat, north of Manila is the place.  For me, Abe’s Farm is one of those perfect getaway places where one can just stay quiet, have a short social media detox, simply breathe and relax.

A perfect add-on to this is the food that they serve.  Situated right in the heart of Pampanga, the culinary capital of the Philippines, Abe’s Farm food offers what one can call an assault to the senses – texture, color, presentation and of course taste.

Yeah. I gave myself some short quiet break.  And just this weekend I am again at Abe’s Farm.  I guess Abe’s Farm though not a “next-to-someone” is one of my favorites.

Tasting for the first time the best cassava cake in the universe was so out of place.  It is so odd and strange that I was able to experience such an enormous gastronomic pleasure while in a wake.

This was roughly about a month ago when I and my workmates paid a visit and express our condolences to a co-employee whose dad passed away.  The wake was in the provincial town of Magalang in Pampanga.  While in the wake, we were served with knickknacks and refreshments including boxes of freshly baked cassava cakes.

When I go to a wake, I would traditionally just nibble on salty chips and snacks (like the all-time favorite burol-snack: Butong Pakwan) which is usually served in a Filipino memorial service.  I rarely eat and munch on main meals while in a wake.  But when we were served with the mouth-watering and sinful looking cassava cake, I broke my own personal tradition.  I simply helped myself to a bite of rich taste of perfection.

That cassava cake had the seamless velvety texture mixed with the perfect harmony of flavors.  Good thing I was able to control myself because I wanted to clap my hands, celebrate the happy moment and jump for joy due to the enormous palatal experience I just had. 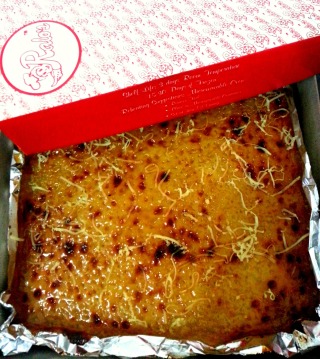 ralo’s cassava cake. fattening? yes… but such a small price to pay for pleasure

Yesterday, I had the chance to go again in Magalang, Pampanga for an official business.  I thought I have forgotten the great gastronomic experience but I was dead wrong.   The search for the same experience I had was on!  It is no longer the mere experience of great texture and flavor but more of a lingering voice engraved on my mind.

Like some curious addiction, I texted my co-employee and inquired where in Magalang did they bought the cassava cake his family served during his father’s wake.  He messaged back telling me the spot somewhere in Angeles, Pampanga.  And, after doing some office-required stuff in Magalang, I asked the driver to bring me to Ralo’s where these rich cakes can be purchased.

we were laughing when we tried reading “Sssooobbbrrraanngg Sssaaaarrrrapppp” on their sign board.

I bought two large boxes!  I was so happy I even bought and treated the driver and my co-workers with their own box of this cassava cake.

Warning though for those who bumped onto this post and gets curious about this cake, be careful.  Because once you’re hooked all of your senses and even your soul will never be able to forget its rich taste of perfection.  Kasi nga… Soooobrang Sarrrraaaap!!!

It was eleven thirty in the evening.  I woke up drenched in sweat for I forgot to switch on the air conditioning unit before I fell asleep.  It’s already the third week of May and yet the scorching summer heat still lingers here in Metro Manila.  With this roasting temperature, I am starting to believe Dan Brown when he wrote in his latest novel Inferno that found in Metro Manila are the gates of hell.

I tried but could no longer go back to sleep, I slipped into my old blue jeans and put on a freshly laundered singlet.  I proceeded outside the streets of “the gates of hell” to find anything that will cease the torridity off my body.

About a hundred meters away from my flat while walking through Vito Cruz Street I found an eatery.  It’s about to close but I begged the attendant to let me in for I want to order, guess what? Answer: Halo-Halo.

Yeah! There is a new Teresita’s branch here in hell-gate Vito Cruz!!!  It’s no longer just in the far away hell-gate Tomas Morato!!!

alone inside this refreshment parlor, i did not hesitate taking these photos

Of course I ordered the “Special” version, i.e. with “minatamis na langka” (sweetened jackfruit) only worth Php 95.  It’s not the generic Filipino halo-halo neither the typical Razon’s halo-halo.  Instead it’s of a grandeur version, that is, with heaps of chunky-to-the-bite banana, brutal portions of glutinous macapuno, the sweet viscous lumps of tasty langka, smooth shaved ice with super generous amount of the vicious and sinful leche flan.  I swear to God they have the tastiest halo-halo in all face of heaven, purgatory and hell.

don’t be fooled by the lucid and incomplex look of this halo-halo. astonishing heaven is lodged beneath those shaved ice

After paying my bill and start to walk back to my unit, I realized that Tesesita’s Halo Halo is something that can be compared to a piece of heaven and that I am actually glad to be living here in the “gates of hell”.

Here is my first venture into the world of photography using only my iPhone as my tool as well as the wonders of photo apps, Instagram and Camera360.  As a newbie, I decided to start with landscape, still life and plants as my subject using only the natural light.  These photos were taken at Abe’s Farm located in Magalang, Pampanga. 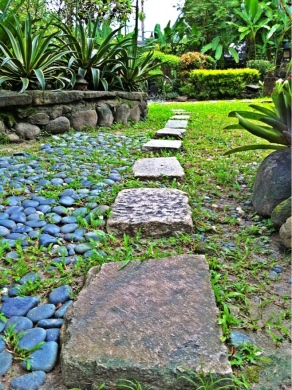 title: blue stones and a pathway 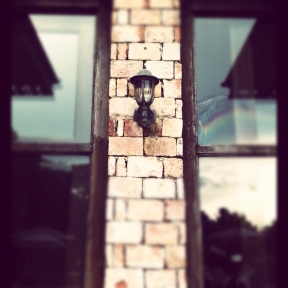 But then again, Abe’s Farm is such a beautiful place any clear, sharp and on-focus shot you make still ends-up being very nice.

It’s simply called C’ Italian Dining.  They have the best and most unique pizza ever which they call Panizza.  A thin-crusted square hybrid pizza sliced in long rectangular cuts that would be best enjoyed if topped and rolled with fresh arugula and alfalfa sprouts.  The perfect harmony of flavors and textures of the dish was just like experiencing a great opera.  While eating my share of Panizza my bones were shouting “Bravo! Benissimo!!!” It’s no wonder we finished three whole pizzas in a matter of minutes! 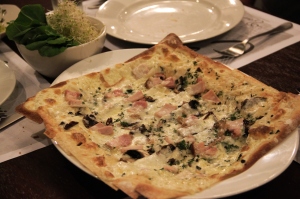 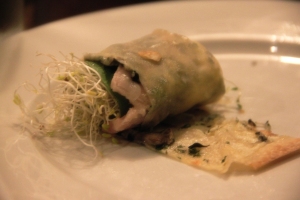 It seems that the servers actually saved the best for last for they served us the best spinach ravioli and the unforgettable penne in chicken and parmesan cream sauce.  Both dishes were simply phenomenal.  The tastes were no longer mere flavors, but more of a lingering voice forever engraved in my mind.

Fattening, yes! But a small price to pay for such a delightful pleasure.  A bit of caution to all those who plan to drive all the way up to Pampanga and dine in this restaurant.  Be careful for you might get hooked, all your senses and even your soul will never forget the rich taste of C’ Italian Dining perfection.