In the company that I am working for, Employees’ Night Party is held yearly.  Instead of the annual Christmas Party as observed by other companies, we prefer to hold the party after the season has simmered down.  It is because during the Santa Holiday Season out group of restaurants are the busiest entities in the metro.  We are actually the servers in others’ Christmas Parties!

And after the busy service during Christmas season, we seem to be ready for a Halloween Party because everybody looks like a zombie by the end of the season.  Nevertheless, during the kris kringle season, I would publish posters counting down the number of days prior to the day of the Employees’ Night so as to build up some excitement.

a collage of “countdown” posters i published in the office

Employees’ Night is held usually on the second or third week of January.  And every year, a theme is appointed.   This year’s theme is Retro 60s and 70s.  The styles, fashion and music of the 60s and 70s era.

Every year my co-employees looks forward to our Employees’ Night.  Almost all of employees would participate in donning in an outfit based on the party theme.  I am just as excited as the rest of them.  And to add more excitement, I created a cute video which features some of my co-employees who has lived during the cool 60s and awesome 70s…

Thank you peeps for submitting your cute cool retro photos! I love them all.  Let show everyone how an awesome party should be done.  See you at the party!

I have always believed that a superb art no matter what medium it is should be something that emits emotion subject to the sensors’ perception.  It should be an art that is open to the subjective interpretation by the people who experiences it.

This precept is especially true of the Filipino film entitled Tuos, an official entry in the 2016 Cinemalaya Film Festival presently running at the Cultural Center of the Philippines.  The conduct of the story as well as the moods of each of the characters in the film are all subject to the interpretation by the viewers. 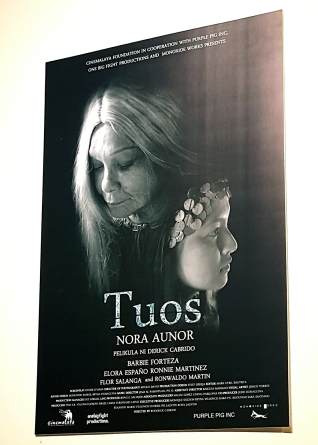 Directed by Derick Cabrido, I consider Tuos as one of the most exotic Filipino film from among the Filipino films that I have seen.  Though the movie has the tendency to get quite dragging, some of the rich colors of the Filipino customs and culture were shrewdly presented.

And aside from the impeccable acting of the legendary Filipino actress, Nora Aunor who plays Pina-Ilog in the movie, what particularly impressed me by Tuos were the additional layers of art that were fittingly mixed in the story.  The landscape presented in a modern visual art and the haunting old folklore of a song mixed together during the animation portion of the movie were pure brilliance.  These layers of art added up to the already rich texture of the movie.

When the movie ended and was already rolling its credits, I was left s mystified, stunned and thinking.  With my limited cerebral capacity, I tried interpreting the scenes and the narratives that were presented.  And there’s one last thing that I realized about Tuos, that it is indeed one exotic and powerful movie that only the smart and brainy human beings would be able to appreciate.

Joel Lamangan is a Filipino film director who has been very successful in consistently disappointing me with his works.  I have seen a couple of his movies but seeing his latest one made me conclude that it would take me a great deal of convincing to watch his future works.

Lamangan’s latest movie is entitled, Hustisya.  It stars the great Nora Aunor. This film is an entry in the on-going Cinemalaya film festival.  Unfortunately, for my taste the 2-hour film, Hustisya, is a big disappointment.  Because I was so bored in the first few minutes of the movie, I kept on looking at my watch.  And to my surprise the first disenchanting 35 minutes of the movie was nothing but seeing Aunor walking within the rundown streets of Manila.

For me, the movie’s core and story can easily be told in less than 45 minutes.  It ran for 2 hours because Lamangan inserted unnecessary footages of the sorry-looking and sordid spots of the City of Manila with the aim of putting socio-political connotations for the film.

Because of the footages inserted in the film and the secondary scenes placed in the movie (like the anti-government rally that suddenly came out from nowhere; the pickpocket scene inside a train; or, the stabbing murder scene along a dodgy street), which has nothing to do with the story has failed to touch a nerve.  His depiction of social ills and government-political inadequacies looks artificially pilit (forced).

Lamangan must thank the heavens for Aunor who agreed to be in the film.  She is the sole saving grace of this movie.  And I cannot imagine how the film would look like or what the film would have become if it was not for the great Aunor who stars in it.  Without Nora, this movie could easily be considered a non-worthy entry in this year’s highly prestigious Director’s Showcase category of Cinemalaya festival.

Though all things seem to have settled down and it has been considered a wrinkle in time, Nora Aunor the greatest actress on the face of Philippine cinema must nevertheless be thankful that she was not bestowed the recognition of National Artist.

She should be thankful for not being conferred by a President who doesn’t seem to know anything about sining (art).  I have yet to read or learn in the news that the present Philippine president supports Philippine art.

She should be thankful for being nominated by her fellow potent Philippine artists but only to be scratched by a non-worthy President because this made a lot of people especially today’s generation to be interested and curious about how magnificent her body of work has been.

She should be thankful because her not being declared a National Artist pushed me to watch one of her greatest works entitled Bona.

the prolific nora in bona

Bona, directed by the equally genius Lino Brocka, remains significant and substantial in today’s time.  The story and characters still remains to exist in today’s Filipino realm.  It is unlike other films made in the past that when viewed now would already look silly and stupid.  It remains germaine and relevant up to this day.

Some would say that Bona (the movie) would have been a better film  if it explained why Bona (the character) had so much obsession and bizarre infatuation towards Gardo (a bit player and struggling movie actor).  For me, this impenetrable and baffling element made Bona a great work of art. It is like conveying that feelings of passion, adoration and reverence need not be explained for it is simply unexplainable.

Bona, the movie is so relevant!  Simply look on how we, the masa (ordinary middling populace) adore and revere today’s movie stars.  Can you imagine today’s glamorous movie stars being so filthy rich when in fact they did not even finished high school or college?

Furthermore, like Bona, we are so unexplainably awestruck by the charm of these movie actors and actresses, majority of us even had the bizarre obsession of voting for them during election to occupy crucial seats in government offices.  Only to be duped and hoodwinked later on by these very celebrities (slash now-government-executives), similar to that of Gardo towards Bona in the movie.

Surprisingly, even though the movie is already 15 years old, it still depicts the poverty and destitution that an ordinary masa endures to experience and suffer from.  It felt like this unglamorous movie was just done yesterday!  It is so unfortunate that the country’s presidents in the past and the present (the one who refused to name Nora a National Artist) seem not have done enough to alleviate these adversities.

Now that the President has gone over with the condemnation by the Philippine art community because of his dim-witted decision of not declaring Nora a National Artist, he should find time to watch Bona the movie.  He would definitely get enlightened and learn a lot about Nora, Bona and the masa.

The first comedy bar that I have been to was more than 2 decades ago.  It was in (the now defunct) Basilica, an old house turned into a comedy bar located in Malate.  I can clearly recall that one of the night’s hosts during that time was Ate Gay who was wearing Darna costume introducing herself as the Nora Aunor’s version of Darna (though Nora never was a Darna character).

Ate Gay (Gil Morales in real life) was a total riot during that night.  He sings, acts and speaks sounding truly like Nora Aunor. He sang Laura Branigan’s upbeat “Name Game” song in a slow ballad-ic way ala Nora Aunor style. I and my friends so enjoyed that night, it paved the way for us to often visit comedy bars which starts to flourish within the Malate area during that era.

But last night, after more than 2 decades, Ate Gay has moved to a much bigger venue.  I guess ten thousand times bigger than Basilica.  He packed the humongous SM Arena!  And as anticipated, Ate Gay’s repertoires continue to be riotously hilarious.  The gut-busting short film at the start of the show and when she entered the stage harnessed across the end of the venue, I knew the concert would be a blast. 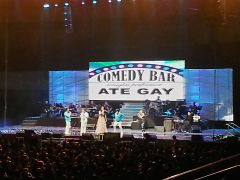 His adorable Darna monologue is still there and it remains exceptionally humorous.  His skill at mixing up various tunes and lyrics received hysterical uproars from the audience.  He is one great genius on extemporaneous mash-ups.  His incomparable declamation entitled “The Door” was also featured which when delivered by others would for sure not be as funny as that of Ate Gay.  Of course, his camp impersonation of Philippine showbiz icon, Nora Aunor, has always been a side-splitting classic.

What I like most about Ate Gay is that he does not need to mock and deride other people to make people laugh.  He actually ridicules himself (his wardrobe, his looks, his voice, his English and even his mole) to elicit laughter from the audience.  He is unassuming, self-effacing and was never “boastful”.  Being able to laugh at one self without conceit and pretensions makes Ate Gay an excellent comedian.

Whether you like it or not Nora Aunor is someone who contributed a big chunk in the enrichment of contemporary Filipino culture.  I actually just finished watching one her greatest films entitled Himala (Miracle).  Thanks to Kuki Catindig for giving me a superb copy.

I have second thoughts writing about this movie because it feels like desecrating such a cinematic miracle.  Himala is a richly textured film collaborated by 3 geniuses of Filipino film industry:  directed by National Artist Ishmael Bernal; starring Nora Aunor; and, written by Pinoy Writers’ Icon Ricky Lee.  A lot has been written and spoken about the film.  But from my own perception and analyses, this cinematic giant is very haunting, brilliantly daring and hugely moving.  It’s a magnificent art that articulates that if truth, hardships and poverty are too difficult to digest; falsehood, religion and illusion will serve its purpose.

The film was made 28 years ago but it still pokes and affects every person who watched it.  The movie seems to breathe and has a life of its own.  It deserves more than the accolades it has already received worldwide.