There is one old building here in Manila that is being dismantled and pulled into pieces.  I am quite affected by this demolition simply because this structure has been part of my young college years.  Being just across our campus, I have always tagged this marvel as the extension of our college grounds.

Me and my collegemates then has considered its spacious airconditioned lobby as our place of solace, our relaxation spot and our undisturbed hideaway.  We truly adore the clean and spotless toilets which were way better, fresher and tidier than the lavatories in our campus.  During cram periods, instead of going to the library, a quiet corner within the building has been our retreat to focus on reviewing prior to an intense exam. 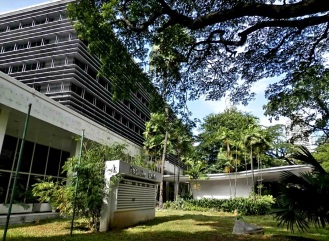 iconic piece of architecture (photo not mine) 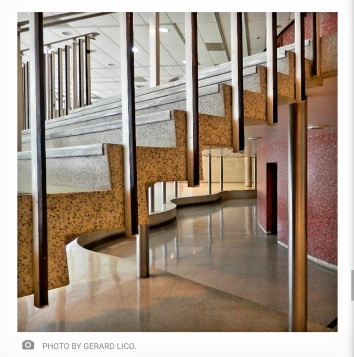 The building’s large cafeteria was our go-to dining hall every time our school’s canteen serves super oily, flavorless and unsavory dishes. The only thing that we seem to have failed to do was to hold the actual class inside that building!

The long airconditioned hallway of the ground floor from the main entrance leading to its side door has been me and my classmates’ short-cut route when we want to go to the nearby mall.  My college mates may not know this but I personally admire the huge old trees outdoor that surrounds the building and I gape and ogle towards the gorgeous art pieces (sculptures & mural paintings) that lies and hanged around the main lobby. 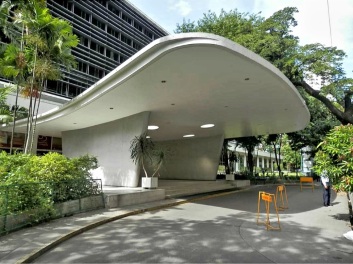 the facade of the main entrance… (photo not mine) 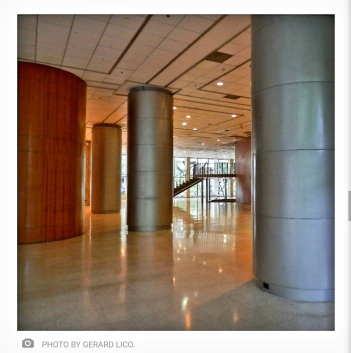 This building has been so part of my college life.  Me and my classmates even celebrated a milestone with this building because its marvelous auditorium was in fact the venue of our baccalaureate mass and graduation rites when we finished our college degree in the old Manila Doctors College.

And lately have I only known that the stunning auditorium was renowned for its excellent acoustics.  I never knew that this auditorium was done by the same engineers who did the Sydney Opera House.  If I only knew then, I should have instead sung an enchanting song when I was tasked to deliver the graduation speech during our college graduation rites. 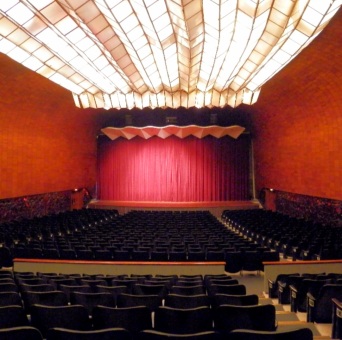 with those acoustics, i should have sung a song! 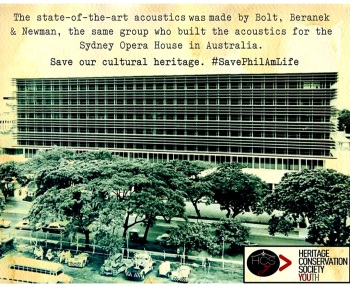 With all these memories and recollections, the ongoing ripping into pieces of the iconic and magnificent Philam Life building along United Nations Avenue in Manila is truly making me sad.

I follow the Facebook page of my college alma mater.  The officer of the Alumni Relations Section of my old college plans to highlight endeavors and achievements of all alumni then posted a message.  She asked all graduates to inform her via private message about the following information: full name; baccalaureate degree earned; year graduated; present occupation; and, present country living in. 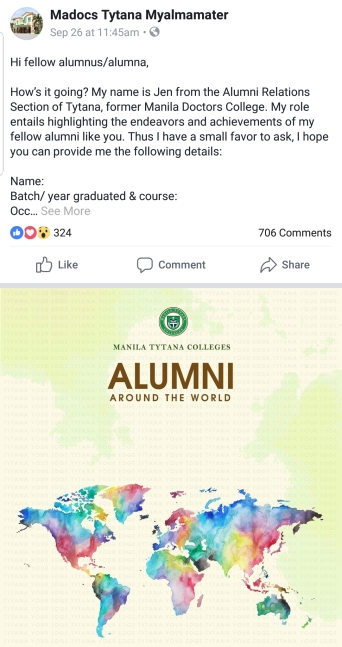 Instead of sending private message about their present status a lot of graduates opted to post in the comments section about the information being asked by the Alumni Relations Officer.  I was stunned at how successful all these alumni who posted their respective comments/status.  Those comments are awe-inspiring testimonies about the quality of education as well as how holistic personal developments are being honed by the Manila Doctors College now known as Manila Tytana Colleges.

I opted to follow the favor/instruction of the person who needed my data.  But I tweaked it a little!  Here’s what I posted:

Name:  (my whole name, which is so saintly by definition)

True Occupation:  (my present occupation, which is so mind-numbing in nature) 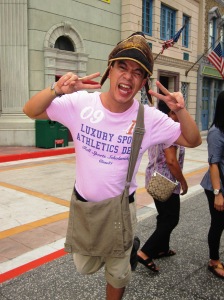 I am so glad and honored that I could no longer contain my dignified silence.  Manila Tytana Colleges (formerly known as Manila Doctors College), my alma mater, has chosen me to be this month’s alumnus.  I am clueless about the college’s External Affairs’ criteria for choosing me but let me extend my deepest gratitude.

According to the e-mail notifying me about this recognition, a short narrative and a short-bond-paper sized photo of my delicious and drop dead body will be posted in one of the college’s bulletin board.

I don’t have the time to check out what the college has written, but I presume it would be something positive.  I just hope that they gave me the opportunity to write the short narrative about myself because this is what I want them to post on that bulletin board…

During his BS Psychology student days in the college, he was tagged as the scholar-zilla who constantly exhibits tantrums and emotional meltdowns.  He was the most annoying student during his time.  Irritating enough that he won’t answer any question during class but instead snivels, fells ill, bleats for mercy and acts like the victim.

His sense of humor sucks and has a dreadful taste in fashion.  His favorite movie actress is Bella Flores.

But seriously, let me extend my overwhelming gratitude to MTC or MDC or whatever future name you would be… 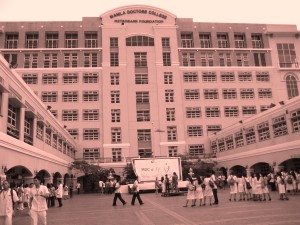 Yesterday I received an e-mail from a certain Catherine Aquino attaching the official statement of Manila Doctors College’s name change.  It indicates that the school will now be named Manila Tytana Colleges – naming the school after the mother of its Chairman.

I respect the MDC management’s decision in its name change but I being a simple alumnus of MDC (and other Madocians for sure) are definitely saddened about this development.  This prompted me to wear an all-black-clothing today for me to personally observe the death of the name of a school I learned to love, value, honor and adore.

A couple of months ago, I even wrote a foolish and ridiculous write-up about this issue in this blog when rumors reached me with the hopes that this little-tattle is not true.  Consider this as my initial reaction of “in denial” and “anger” stages of grief.   (please click “here” if you wish to check it out)

Well I guess, any effort to reverse MDC management’s decision may be too late already and I should learn to accept the fact that the internationally renowned name Manila Doctors College will soon be blasted into smithereens.

With its new name, there will be a lot of compelling and necessary adjustments, modifications and transformations that the former MDC’s present management will have to do which I would not want to enumerate here in this write-up.  It’s their job, so let them do it!

Being part of the corporate world for more than 15 years, I would like to believe that “change” is one inevitable reality that people should accept so as to adapt to the ever changes in the corporate world.  “Change” makes businesses to move forward, further its security, be more adaptable, and of course be more financially sound.  I’d rather change the name of the business institution and move forward instead of restraining its capacity to expand due to the limitations of the institution’s name and end up losing and closing it down.  Therefore, I’d rather change the name of Madocs to something else for it to grow further rather than limiting its capacity to swell or totally kill it.

Another thing that will be definite, “Madocians” death will give rise to the “Mighty Titans”.  I am a former “Madocian” but a newborn “Mighty Titan”.  I respect the opinions and sentiments of all Madocians.  I hope you respect mine… 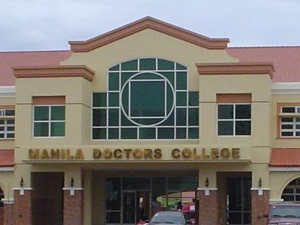 Being an alumnus, I was saddened to learn from the grapevine that the present officers of Manila Doctors College have plans of changing the name of the school.  According to the outrageous rumor, the executives are contemplating on changing the name because the degree courses to be added are not going to be “health related” anymore.

If the gossip is true, I don’t know what in the world were the present high and mighty magistrates of MDC are thinking that the word ”doctor” is a word only related and limited to health.  According to Wikipedia, the word doctor is a title that is accorded to someone who has received a doctorate degree.  It is a textbook case that a doctorate degree is conferred to persons not only in the health-related field, these MDC chieftains themselves maybe Doctors of Education or Theology which may not in any way be related to the medical field.

Dr. Valentina Vrandakapoor, my favorite doctor is not even a physician.  Dr. Valentina, the Queen of the Reptiles and the most notorious nemesis of Darna earned her PhD in Reptilian Zoology!

A co-alumnus upon learning about the buzz even suggested that graduates from MDC create a united body to air its concern of not changing the school’s name otherwise all hell breaks loose.  I in contrary suggested that we might as well recommend a new possible name of Manila Doctors College in which the acronym MDC should remain.  This will at least warrant the new name to still start with the M, D and C acrostics.  I was even willing to treat a dinner to the person with the best name suggestion.  Here are some of my twisted name entries: