The Tourism Office of Turkey should pay me! Hahaha! This is because there has been quite a number of Filipinos (mostly my friends and relatives) who are now wanting to tour and visit this transcontinental country of Eurasia.

Turkish people should know that there seem to be some level of dreadful and critical image lurking within the minds of Filipinos about Turkey.  May be it is the media responsible in doing so.  It is because we Filipinos are only informed about Turkey when some bad or terrible new happened in that side of the world.

Actually, friends and colleagues were amazed to find out how beautiful Turkey is through the photos I posted in my Facebook and Instagram accounts.  But their first question if they happen to meet me about my Turkey journey is if it is safe and secured.  My usual answer? I was also hesistant on pursuing my Turkey journey prior to leaving Manila.  But towards the end of my Turkish adventure did I realize that it is one safe, harmless and innocuous place that I have been to.

To further prove my amazement about Turkey, let me feature the explosively beautiful Pasabag.

It’s a valley with unique and astonishing rock formations where you’ll get a feel of Cappadocia’s striking and iconic fairy chimneys. The tuff stone pillars of Pasabag are easily recognizable. It stands at 10 to 15 meters high often with twin or triple rock caps.

Pasabag is often referred to as the Monks Valley.  This was due to St. Simon and the monks who sought refuge inside this rock formations.

Monks sought shelter in Pasabag after attracting unwanted funfair-like popularity after the public learned that they are some kind of a miracle-makers. To create shelter, monks would start by carving rooms for themselves at the bottom of the fairy chimneys and work their way to the top.  They were said to only descend to receive food and drinks from their disciples.

With the “pasabog” (translation: explosive) beauty like Pasabag and all the other equally amazing spots of Turkey, I hope that this country would soon erase (or at least improve) their undesirable image among the Filipinos.  I hope that this country would not remain to be like the monks of Pasabag who chose to be left unknown from the awareness of the itchy-footed Filipino travelling wanderlusts.

I stepped out of the store to look around, but I noticed that it was only me and the man inside who were there in The Love Valley, all the rest of the Chinese tourists has left along with their big van.  Feeling like a captive, I muster the courage to inquire from the man inside if taxi cabs passes by that area of Cappadocia.  He says never.  He relayed in broken English that taxis that goes to the Love Valley are at all times with a passenger who rented the cab to be driven around the sites of Cappadocia the whole day.

this suddenly became the tastiest tea ever! 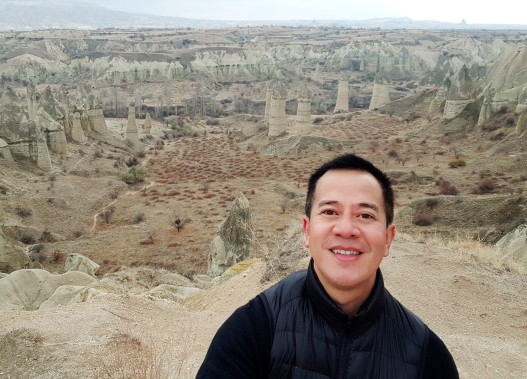 unleashing the power of the selfie stick

With teary eyes, I asked the man if there would be a possibility to call a cab and ask its cab driver to pick me up in The Love Valley.  Without any response, the man then stepped inside the inner confines of his store (for authorized personnel only area I suppose) and when he reappeared, a calling card of a taxi was in his hands.  He then pulled out his mobile phone from his pocket and started pressing the numbers.

When the man ended his conversation in his mobile phone, he told me that a taxi would arrive in about 30 minutes to pick me up and drive me to my hotel.  He then told me that the whole taxi fare was worth 30 liras.  I instantly agreed with the price.  I was actually willing to pay more than that! Hahaha!

The man then told me to sit, sip my tea and patiently wait for the driver.  I instead, walked out and started to see again the beauty and magnificence of The Love Valley.  I took another set of selfies of me with the valley and walked again inside the shop.  I was so happy I wanted to buy all the merchandise inside the store.  I could not control my happy feelings, I told the man that he is such an angel!

While waiting for my cab without any tourist or buyer around, the man and I got to converse.  I learned that his name is Darius, he is a Christian, living by himself in Turkey and hailed from the Muslim country of Iran.  He talked about how he misses his family back in Iran and even relayed how difficult it was to be a Christian there.  And when the taxi cab arrived, I could not control myself but to give Darius a big warm hug!  I whispered to his ear… “You take care and may God bless the people like you” before finally bidding goodbye.

While the cab was moving away from The Love Valley, I was humming Madonna’s 80s song entitled Angel.  And when I was near my hotel only then did I realize that indeed an angel can appear in unexpected ways. And when I entered my hotel, I looked for the owner and thanked him for not letting me book the Red Tour option.  He asked me why but I refused to answer.  I gave him a nice smile and told him I need to get to my room to take some nap.

I also noticed that there was no other person who was hiking during that time from Uchisar to Love Valley. After much contemplation and being so pissed off on myself for not just getting a cab from Uchisar, I concluded that maybe hiking in this area is only done during summer and spring time and never on the time I was there, the start of winter. 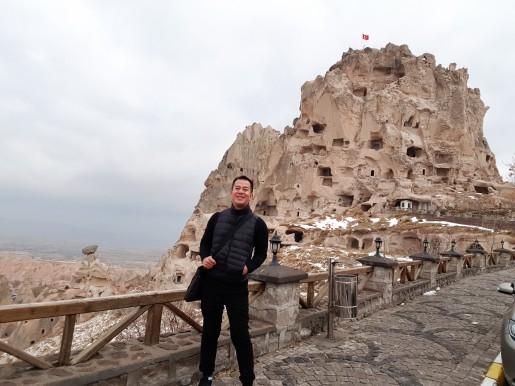 useful google map! notice, there are no alternative route neither a short cut. 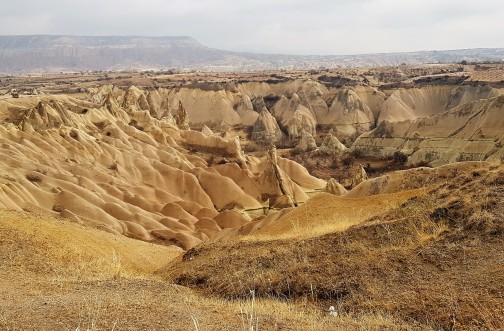 a common view between uchisar and the love valley. this starts to look ugly to me when my legs starts to fail me

But when I checked Google Maps and showed that the remaining time for me to reach the Love Valley was only 5 minutes of brisk walking, I took a deep grasped and told myself that I will not die in that deserted place and can make it to Love Valley. And when a big stray dog barked at me and I saw a shed with a signage signifying that such structure is a store I started to grin. And a full gleaming smile emanated from my face when I saw a big van parked and a bunch of Chinese tourists alighted it and took photos of one of the most beautiful sites on the planet called The Love Valley.

The first thing I looked for inside the store was a chair for me to rest. And when I was starting to feel relaxed, only then did I noticed that the store is a souvenir shop manned by a neat and well-mannered looking man sipping a hot Turkish tea. I looked around for a possible purchase but instead of buying an item, I asked the vendor if the store serves hot tea like the one he was sipping.

The gentle-looking man confirmed then pointed me to a small and humble-looking dining table. In less than a minute, I was served with the tastiest tea that I ever had. And while sipping my hot tea, I searched Google Maps on how long would I have to walk again for me to return to my hotel.

And when Google Map indicated 55 minutes, I wanted to cry! I started blaming myself for agreeing with the hotel owner of not booking the Red Tour. I was finding faults in myself for not hailing a cab that can drive me to that place when I was in Uchisar. And I was starting to hate the beauty of the Love Valley. To Be Continued…

He nevertheless warned me that the longest walk in the Red Tour option from one site to the next would take me about an hour.  That was the walk from the rock tower of Uchisar to the sensual-looking rock formations of the Love Valley. 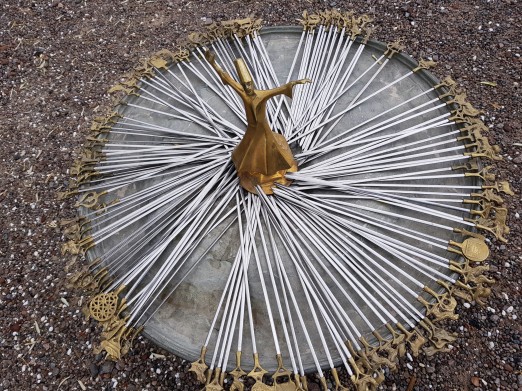 took loads of photos along the way 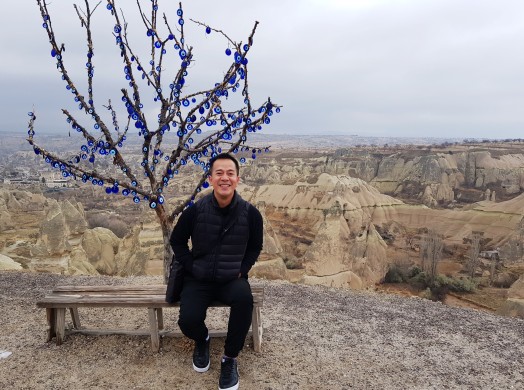 From my hotel, I reached Uchisar after a 40-minute walk.  The walk was not incessant and continuous because I got to stop and do some detour so as to marvel at some of the most beautiful valley formations and breathtaking geological sites on the planet.

After getting around Uchisar and decided that I have to get to my next destination, I remember the hotel owner informing me about the 1-hour hike if I want to go to the Love Valley from Uchisar.  This was confirmed when I checked the information at Google Maps.

tour groups on shuttle would not be able to get a photo like this!

entrance to the pigeon valley… 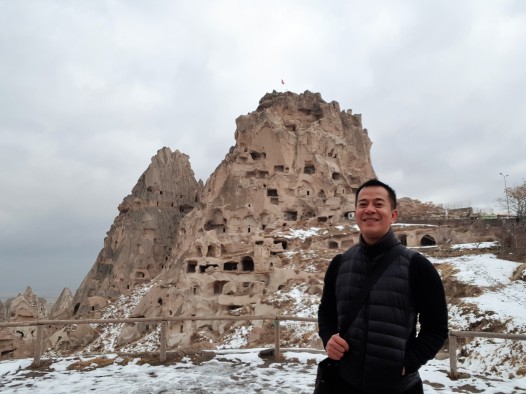 And since I have nothing to do for the rest of the day but to gape and admire the natural wonders of Cappadocia, I gathered a lot of emotional fortitude and decided to walk my way from Uchisar to Love Valley.  But in the middle of my hiking my emotional fortitude starts to wane and it is instead being replaced and overpowered by my physical feebleness.  On the 30th minute of my slogging, my feet, my knees and my shoulders are starting to hurt.

Since my physical being is starting to fail me, the beautiful barren fields between Uchisar and my next site to visit has started to look like a severely distressing place to be at.  All I wanted at that time was a commuter bus or a taxi cab to pass by so that I could hail it and pay the driver whatever amount he wants as long as he will drive me fast to the Love Valley.  But except for one old rickety car that passed by, there was never a vehicle in sight during my hike. To Be Continued…