I have always believed that a superb art no matter what medium it is should be something that emits emotion subject to the sensors’ perception.  It should be an art that is open to the subjective interpretation by the people who experiences it.

This precept is especially true of the Filipino film entitled Tuos, an official entry in the 2016 Cinemalaya Film Festival presently running at the Cultural Center of the Philippines.  The conduct of the story as well as the moods of each of the characters in the film are all subject to the interpretation by the viewers.

Directed by Derick Cabrido, I consider Tuos as one of the most exotic Filipino film from among the Filipino films that I have seen.  Though the movie has the tendency to get quite dragging, some of the rich colors of the Filipino customs and culture were shrewdly presented.

And aside from the impeccable acting of the legendary Filipino actress, Nora Aunor who plays Pina-Ilog in the movie, what particularly impressed me by Tuos were the additional layers of art that were fittingly mixed in the story.  The landscape presented in a modern visual art and the haunting old folklore of a song mixed together during the animation portion of the movie were pure brilliance.  These layers of art added up to the already rich texture of the movie.

When the movie ended and was already rolling its credits, I was left s mystified, stunned and thinking.  With my limited cerebral capacity, I tried interpreting the scenes and the narratives that were presented.  And there’s one last thing that I realized about Tuos, that it is indeed one exotic and powerful movie that only the smart and brainy human beings would be able to appreciate.

It’s like a bunch of angels went down from the heavens and played us some awesome music!

This is the general feeling I felt after having watched and listened to the concert of no less than the Philippine pride, the Philippine Philharmonic Orchestra (PPO).  Held at the outdoor amphitheater area of the Bonifacio High Street Central in Bonifacio Gobal City (BGC) the concert was entitled “A Holiday Symphony”.  It was organized by the LJC Group, the BGC and the Cultural Center of the Philippines.

This PPO event was free to the public that is why I did not let this rare chance pass by.  What is so good about the concert was their chosen repertoire.  It was pop and popular to the ear and not the usually highfalutin sleep-inducing classical tunes. 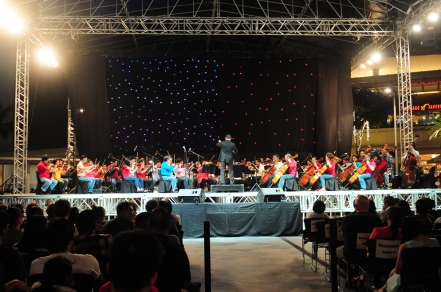 cellos and the cellists… (photos by patrick uy)

Though the program started with a classical piece – to the beat of William Tell Overture – it was nevertheless fun and exhilarating to the ear.  It is because the tune was reminiscent of the background music of a Looney Tunes cartoon chase scene.  I initially thought Wile E. Coyote and the Roadrunner would suddenly appear on stage!

One of the highlights of the show was when a good friend Edwin Santos sang two songs in the concert.  He started with Pasko Na Cinta Ko (a Tagalog Christmas love song) and capped it with an explosive operatic performance by singing the Mexican song Granada.  I was super proud and was cheering like mad for Edwin! 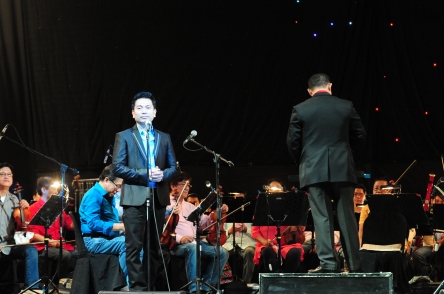 PPO played Donna Summer songs, tunes from Star Wars plus a lot of Christmas songs crafting a very Christmas-ee feeling in the crisp November air.  When the orchestra played the gorgeous tunes from the movie Titanic, I initially held on to my seat for I thought a humongous ocean wave would suddenly appear bringing Rose and Jack on the stage!  But nothing beats the couple of Beatles songs they played.  People in the audience were actually singing along with them!

It is not the first time I heard PPO played yet still the emotions they drew from me was something unexplainable.  The nearest words that I can think of is it’s a mix of magic, glee and pride.

When the movie suddenly stopped and reeled on the credits, I felt blunt.  The people in front of me were already standing up and leading their way out of – CCP’s Tangahalang Huseng Batute – theatre, but I was still seating there trying to absorb and figure out what I just saw.

For me, few of the most sleep-inducing places on earth are the theaters of the Cultural Center of the Philippines (CCP).  It has autumn-like indoor temperature that makes you want to hibernate.  It also have super soft comfy seats, an easy-to-the-ear acoustics as well as relaxing lighting facilities which would make you drift off faster.  It is one big sleep cave!!

Therefore, if I watch a show in CCP it needs to be very good, interesting, entertaining and/or thought provoking for me to stay awake.

With this thought, I actually almost fell asleep while I was watching the Cinemalaya 2013 New Breed entry entitled Nuwebe.  It has an interesting plot but the director seemed to have missed on how to impart and expound on the attention-grabbing material.  It was a lame creation.  Some loopholes of the movie were actually being laughed at by the audience.   The only redeeming quality of the movie was the superb acting by the lead character played by Jake Cuenca.

I was about to fall asleep when credits at the end of the film started rolling.  I did not clap my hands and I simply stepped out of the CCP theatre… silently snoring.