With the present psyche of the Philippine society being backed up by extreme and ambiguous religious belief, I have long accepted the fact that legalizing same sex marriage in this country would be so remote.  Thus, asking a famous boxer and part-time politician in a country where the majority of its populace are unfortunately not in the side of reason, if he agrees or disagrees on same sex marriage is nothing but pointless.  The system will not change in case he agrees with same sex-marriage anyway.

There has been a lot of people who opposes same sex marriage but these people were prudent and human enough not to compare LGBT people to being inferior to animals.  And though I disagree with them, I respected these people’s stance. But what broke my heart was Manny Pacquiao’s cruel statement of comparing the LGBT to being worse than animals.

the proof of my being a fan. the personalized shirt i would use during boxing events of manny. i don’t know what to do with it now… its eating some precious space in my cabinet…

Manny Pacquiao uttering this insensitive and idiotic idea made my respect for him simply fade away.  My being a fan simply vanished out into smithereens.  He is definitely awful and is one serious disappointment.  To those who think that what he said was okay, I’m sorry to all of you because Manny himself know that he was mistaken.  He would not apologize if he knows that he was not off beam.

Yeah, he has apologized but sorry the emotionally wounding damage has been done and though it may heal (hopefully soon), forever will remain one ugly scar.

And from the last time I checked prior to Mr. Pacquiao’s atrocious statement, my married LGBT friends who are living in a peaceful and productive lives has not in any way hurt or even negatively affected the boxing and political career of Mr. Pacquiao.  I don’t see the reason why he would disappointingly hurt them then? 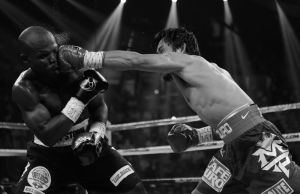 While the whole world is still trying to figure out how to swallow the bitter reality that Manny Pacquiao lose a fight yesterday to Timothy Bradley, have you ever seen your dad, brother or best friend how they looked like while watching the controversial fight?

Every time there is a key boxing event, I am always reminded of my late father.  In my childhood days during these major events no one in the household could watch anything on TV.  Switching the channel would be like chasing bad luck and adversity. Thus you would have to settle with other forms of entertainment.  But for me my dad is my source of entertainment during these TV boxing episodes.

He is not the commonly overt cheerer type.  He is neither a clapper nor a shouter.  When he watches a fight, he would slightly sway his body from left to right front and back as if he would parry, dodge or deflect an opponent’s punch.  These movements are so faint and subtle you wouldn’t notice it unless you would stare, watch and observe.

That is why every time my father would watch a boxing match I would cunningly observe him.  When his posture and movements would go too obvious, I would laugh out loud.  He would then gently ask me why I am laughing and I would just say nothing and pretend as if I am also watching the match aired on TV.  When he would shift his center of attention back to the fight on TV I would again watch him and laugh out loud once more when his swaying movements would yet again gone too apparent.

Bradley, Pacquiao, Maywheather, Donaire and other pound for pound kings may popularly break through the history of boxing and will eventually retire but Tatay Joe’s eccentric yet barely obvious moves will always remain as the most entertaining to watch during a boxing match.  I of course will forever cherish those treasured moments.

So the next time your dad, husband or brother would watch a boxing match on TV try watching them instead and be entertained!

So the Gods, the odds and karma are again in favor of Manny Paquiao.  His win today against the bigger Antonio Margarito only confirms that Paquiao is the greatest boxer in modern history.  Every time Pacquiao wins a boxing fight, I am always so impressed by how the heavens answer the intense prayers of Nanay Dionisia (his mother).  Also, every time Pacquiao wins a fight, I always remember my first ever encounter with this boxing hero.

It was more than a decade ago when I was still working as the Head of HR in 3-star Royal Palm Hotel (now Lotus Garden Hotel) located in Ermita, Manila.   Pacquiao then was a budding boxing athlete who could hardly speak the English language and was worth less than a million pesos.  He was not yet popular then.  Even the boxing ring announcers during that time could hardly pronounce his name.  He is either introduced as “Pakyeyiyow” or “Pekyaw”

Pacquiao during that year was due to have a boxing fight in Manila with Mexican Gabriel Mira and no five-star hotel (I suppose) agreed to sponsor both fighters’ hotel room so the organizers settled with ours.  Both Pacquiao’s and Mira’s team were billeted in our hotel.

I remember the owner of the hotel instructed me, Mr. Sal Magugat the Resident Manager and Mr. Oca Bangayan the Head of the Security to ensure that Pacquiao be given the most comfortable room.  On the other hand, she further ordered that Mira be assigned in a crib where the noisiest air conditioning unit is situated or in a chamber located on the street-side of the hotel where the earsplitting engines and honking of public utility vehicles (like jeepneys and taxi cabs) can be heard inside the room.  That’s just precisely what we did.

The following day, it was in all broadcast media that Manny Pacquiao retained his WBC Flyweight World Title and was tagged as boxer with the greatest potential to be the next boxing hero of the Philippines.  Let me clarify that Pacquiao did not cheat it’s just that his opponent was puyat (without sleep).