This blog post officiates my being an avid fan of Celia’s Café, the number 2 restaurant according to TripAdvisor in Alaminos Pangasinan.  Number 1 restaurant of course is the old and tired Maxine By The Sea located at Lucap.  Though run-down and the food served were average, Maxine By The Sea is the leading restaurant in Alaminos.  Its TripAdvisor’s number 1 because it is located at a wharf near the dock where tourists would have to take a boat ride to reach the majestic Hundred Islands.  It’s one of those rare eateries whose reason for being number 1 is not their food nor their service but its location.  I still remember way back in the early 90’s was the first time I dined there.  It was also my first time in Hundred Islands! 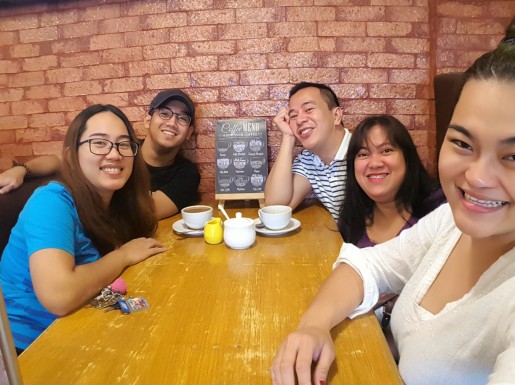 me, my sister and a few of my monster pamangkins

The number 2 restaurant on the other hand seem to possess the thrilling potential of becoming the leader among restaurants in Alaminos.  Celia’s Café seem to capture the urbanized and the ruralized feel.  Their ambience and facilities are homey yet urbanite.  Because of the modern feel of the ambience, you will never miss the feeling of being in an urbanized city when you dine there.  But their warm service is naively bucolic.  Celia’s Café are manned by gentle and courteous lads, which reminds you that you are indeed in a countryside away from the jungles of Manila.

But what I particularly love about Celia’s Café is the food.  It’s surprisingly delicious!  During my recent revisit, I again ordered the Pasta Longganisa for lunch, the one I ordered the first time I dined there.  All I can say is that it is consistently luscious.  The only thing that changed was the bread.  It is because it is now tastier and more delicious.  The focaccia bread was so good, I ordered extra and even ordered take-out so as to bring it back to Manila! 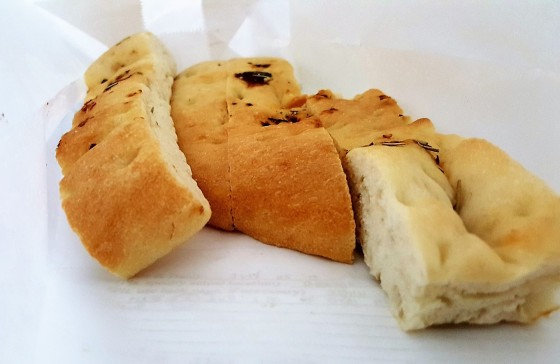 focaccia inside a bag (my take away!)

And since there seem to be no agreeable restaurant establishment in Alaminos except for Celia’s Café, me and my family returned at dinner time.  We ordered the platter in which, one order is already good for four (4).  I was especially impressed by the flavors of the Chicken Platter.  It is because each dish in the platter tasted differently.  It was unlike the platter offerings by other restaurants in which each dish seem to taste the same with other dishes in the platter.  The Southern Style Fried Chicken was of a totally different flavor from the Chicken Salpicao and the Chicken Salpicao was of a totally different taste from the Pork Tonkatsu.  And what is best about the platter was the generous serving of rice!  To top it off, we were surprised to find out that our ordered platter comes with a whole serving of soft and chewy pancakes!

The following morning before heading back to the jungles of Manila, me and my family returned to Celia’s Café to have breakfast.  I had the big fulfilling English Breakfast, which I guess is the only English breakfast dish served in the whole of Alaminos province.

Enough said and I am impressed if you reached this point of this blog.  Hahaha!  I think I already said that I am a fan.