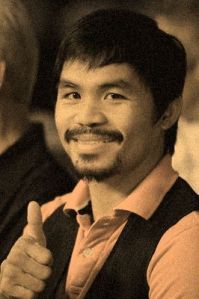 So the Gods, the odds and karma are again in favor of Manny Paquiao.  His win today against the bigger Antonio Margarito only confirms that Paquiao is the greatest boxer in modern history.  Every time Pacquiao wins a boxing fight, I am always so impressed by how the heavens answer the intense prayers of Nanay Dionisia (his mother).  Also, every time Pacquiao wins a fight, I always remember my first ever encounter with this boxing hero.

It was more than a decade ago when I was still working as the Head of HR in 3-star Royal Palm Hotel (now Lotus Garden Hotel) located in Ermita, Manila.   Pacquiao then was a budding boxing athlete who could hardly speak the English language and was worth less than a million pesos.  He was not yet popular then.  Even the boxing ring announcers during that time could hardly pronounce his name.  He is either introduced as “Pakyeyiyow” or “Pekyaw”

Pacquiao during that year was due to have a boxing fight in Manila with Mexican Gabriel Mira and no five-star hotel (I suppose) agreed to sponsor both fighters’ hotel room so the organizers settled with ours.  Both Pacquiao’s and Mira’s team were billeted in our hotel.

I remember the owner of the hotel instructed me, Mr. Sal Magugat the Resident Manager and Mr. Oca Bangayan the Head of the Security to ensure that Pacquiao be given the most comfortable room.  On the other hand, she further ordered that Mira be assigned in a crib where the noisiest air conditioning unit is situated or in a chamber located on the street-side of the hotel where the earsplitting engines and honking of public utility vehicles (like jeepneys and taxi cabs) can be heard inside the room.  That’s just precisely what we did.

The following day, it was in all broadcast media that Manny Pacquiao retained his WBC Flyweight World Title and was tagged as boxer with the greatest potential to be the next boxing hero of the Philippines.  Let me clarify that Pacquiao did not cheat it’s just that his opponent was puyat (without sleep).