I am glad that I have been invited and was given the opportunity to talk to you today.  Your field of studies (Nursing, Psychology, Hotel & Restaurant Management and Nutrition) can be considered as professions close to my heart.

Psychology simply because I myself is a proud BS Psychology graduate of this very institution; HRM because I have been a human resources practitioner in the hotel and restaurant industry for more than 10 years; Nurtition because working in a Class A group of restaurant company entails me to have some knowledge and appreciation about this field; and, Nursing because I have a lot of close friends – most of whom graduated in this college – who are now successfully living their dreams as nurses in and out of the country.

My experience as a BS Psychology student in Manila Doctors College is one event in my life that I will never forget and will always treasure.  These experiences in Madocs enabled me to hone my molecules to be a good soul both personally and professionally.

Last August 15 after attending an Alumni Meeting with other graduates of this school, me and my classmates (batch ’91) got the chance to do an ocular visit of the facilities of the present school.  Itaga nyo sa hypothalamus ko, but we were so amazed at how gorgeous, organized and updated your school is. 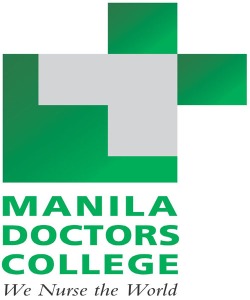 It is so unlike the campus where I attended my college.  The campus in UN and Kalaw Avenues was old, rickety and small.  There were basically 10 rooms available for all students to use.  Actually, the whole campus is – I think – only as big as that of your present library.

During that time, the classrooms – in fairness – were in installed with aircon units but students would have to seek approval from the registrar’s office to run it, which were always disapproved.  Thus, we have to settle for the dusty electric fans.  Just imagine how we listen to lectures and take the rigorous exams in those classrooms habang bumubula ang kili-kili namin?

Our PE back then was held in Pope Pius gymnasium, located around 400 meters away from the campus.  Yes, we would walk to Pope Pius under the heat of the blazing sun.  Walking that far could be a good cardio-vascular workout but we of course needs to be mindful of the motor vehicles passing and criminal elements present in the street of United Nations.  Swimming is my most vivid PE class memory.  We got to use a small swimming pool in Pope Pius, in which we do not have an idea who used it prior to our class and if the water was ever changed and treated.

At present the school has a vast campus ground where students can practice their dance production numbers, drama presentations or oral reports required in your class subjects.  You don’t need to go out of campus to practice.  During our days, we would walk to nearby Luneta or schedule our group to a classmate’s big house just to practice our presentations.

There were only 2 washrooms for female students and 1 small toilet for the male population.  Thus, it would be so hard to answer the call of nature during those times most especially when you are to do number 2.  Never in my 4 years of precious life and attending class in that campus that I defecated in that measly toilet.  During that time, the hospital admin does not allow the use of hospital toilets by Madocs students.  Out from our ingenuity, we have to either sneak in at toilets of the nearby 5-star hotel along UN Avenue or at the Philamlife auditorium just to release those persistent digestive leftovers.

The library facility then was an undersized room with limited books as references.  And there was no computer available to google your assignment.  Me and my classmates would either go to National Library, CCP library or other campus’ libraries and pay for an expensive library fee just to research on topics we were required to submit or study.  It is unlike today’s library facilities.  It is complete, vast and connducive for studying.

It’s not new to us that Kalaw and UN Avenues suffer from drowning floods even if light drizzles would fall from the heavens.  No thanks to the intertropical convergent zone because during our days, it would be so difficult to report for class or go home from school when rain falls because we have to soak and drench out feet from those floods.  Me and my schoolmate (particulalry Dr. Susarah Perez, a 1991 BS Zoology graduate) would sometimes joke while waiting for the flood to recede.  That we might as well get a straw from the canteen and start sipping the water so as to immediately diminish those filthy flood for us to go home already.  It is unlike the location of the present campus where urban planning is so organized.  The campus is located in the portion of the city where a more organized and civilized set-up is evident.  It will truly take tons of rains before the street of Macapagal highway will be filled with rain water.

At a much lighter observation, you have the high-end Blue Wave food establishments and massive SM-Mall of Asia to go to if you wish to unwind after a very hectic schedule in school.  In our days it was Masagana Superstore located in Kalaw corner Taft Avenue or the old and un-renovated version of Robinson’s Mall in Ermita.

You may think and ponder that the things I am discussing today are too babaw.  It’s too shallow, it’s so superficial.  But you should understand that studying a college degree can be equated to a sprint athlete.  A superb sprint runner can only run at his best time only if he will be provided with the right running shoes and trained with high-quality training facilities.  Thus, no matter how good the trainor – in your case your professor is – but if the trainee or student is subjected and exposed to inadequate and deficient facilities, the end performance or learning is nothing but mediocre.

While traversing the hallways of this present campus after the August 15 Alumni Meeting, me and my former classmates discussed how things were during those days.  In parallel brainwaves, we similarly hoped that the students today would be able to appreciate what they now have.  If you only knew what was then and what Madocs is now.

I am deriding too much the campus in UN Avenue.  But one great and awesome quality about the campus is UN was the networking opportunity.  During those days in the UN campus, everybody knows everybody.  Since the population was small, you are friends with everyone.  You know everyone’s name and character.  Me as a Psychology student then can ask a couple of lanzones fruits being eaten by a Nursing student of higher year and she would surprisingly give me some without hesitation.  No one in the campus was a stranger!  This is one distinguished positive trait about the campus then.

You may wonder if fraternity or sorority groups exist during our time in the campus.  The answer is a big NO.  There is no brotherhood or sisterhood alliance that I know of that existed during our time.  I believe that this is not necessary anymore since everybody helps and assists everybody in the campus.  We were too busy being ourselves during that time.  No need to organize and join a fraternity just to know who we really are.  Everybody got his or her own disctint personality already.

In 1990, Luzon experienced one of the biggest earthquakes in the country’s history.  Me and my classmates were around in the UN campus when the humongous quake happened.  I remember Ma’am Rose Cosico was our instructor during that time.  Everybody was so nervouss while the quake was occurring.  Ms. Cosico in fairness never left our side during that time making sure that everybody was able to go home safe and sound.  This event demonstrated the school’s character of being an extension of nuclear family.

To cite further that close relationships exists between students of various levels and field of studies in the old campus, let me inform you that just last week me and Sheridan Sia a 1991 BS Psychology graduate was just in Singapore to spend a holiday.  I was just chatting with Ms. Chie Gutierrez, a 1994 BS Psychology graduate via Facebook last Tueday night.  I still have constant communication with Ms. Maya Laguimun-Castillo, a 1992 BS Nursing cum laude and Nursing board exam topnotcher and Mr. Arnold Fajardo a 1988 Certificate in Pulmonary Therapy graduate now both living in the US.  I might stay at Mr. Ernesto Villas’ place – a 1991 BS Zoology graduate – if plans will push through on my next year’s holiday in New York.  I am the Ninong (principal sponsor) in the wedding ceremony of Neil and Vernice Lumacad both 1996 graduates of BS Psychology, held two years ago.  My list of networks from Madocs alumni is a long one and this afternoon’s allotted time is not enough to mention it.

In fairness, during our time, the academic standards of Madocs, I believe was at its peak.  The percentage of licensure examination for Nursing course then was at its height year after year.  It was either 99% if not 100% passing for those who took it.  That is why it came not as a big surprise that the Nursing program was granted a PAASCU Level II accreditation after a couple of years that we have graduated from the school.

My batch taking the BS Psychology course started with more than fifty student-freshmen.  However, there were only twelve of us who graduated in 1991 and finished the BS Psychology course.  Out of the twelve, 1 was supposed to graduate a year earlier and the other was a transferee from a high-end university who joined us when we were in our sophomore year.  The school then did not worry if no one would graduate.  During those times, the school management did not bother kicking-out those undeserving students who failed to reach the high standards of the school.

To end this talk, let me post a challenge to you present students of Madocs.  Now that you are of a larger population, it is a bigger ordeal to know and be friends with everyone.  Now that you have the more-than-adequate facilities in the campus, you must be able to keep the high standards alive.  You being the present Madocians, I hope that Madocs in the field of education will remain a Rockstar! Thank you and long live Manila Doctors College.